The latest trading data is in, and it is evident that this quarter one region’s wines have had particular success at auction. We’ve calculated which wines have seen the greatest incremental increases in bottles traded by using figures collated by Wine Market Journal from sales at the world’s major auction houses, looking at the total number of bottles sold of the top five vintages for each wine over the past four quarters.

In contrast to last quarter’s data, which saw wines from a variety of regions see trading volumes rise, all five wines in the table below are from Bordeaux. Four are from the left bank, with first growth Haut-Brion benefitting the most from increased trade, while right bank Ausone also makes the cut.

Latour is the only wine to feature two quarters running. This presents an interesting counterpoint to the château’s reported fall in trading volumes on the wine exchange Liv-ex. Since its decision in 2012 to withdraw from the en primeur system, Latour has held back its five most recent vintages. It seems unsurprising, therefore, that the wine is less present than its fellow first growths on trading platforms, where recent vintages tend to attract high volumes of trade. However, this has not affected the wine’s success on the auction market, which favours older vintages, and therefore arguably makes for a fairer comparison.

The latest online search frequency data is in from Wine-Searcher, and with it we can see which wines surged in popularity during June. As with May’s results, the effect of the 2016 en primeur campaign is evident, with four of the five spots filled by Bordeaux crus that released their 2016 vintage on or after 31st May.

However, if the en primeur effect is to be expected, the likely reason for Giuseppe Quintarelli Alzero’s appearance at the top of the table could not have been foreseen. On 18th June, NBA star LeBron James posted a photo on Instagram of a bottle of Giuseppe Quintarelli Alzero 2007 that he was enjoying, having spent the day hosting his son’s birthday party. To date it has received well over 200,000 likes, surely contributing to its 168% increase in online search frequency. It appears that whilst La Place de Bordeaux is the fine wine world’s premier marketing machine, it is no match for LeBron James and his 31.8 million Instagram followers.

Returning to the en primeur effect, Canon 2016 was released at £73.35 per bottle on 1st June to great acclaim, having achieved its second-best Quality score ever. The leap in search frequency confirms its upward trajectory. Figeac repeats its May performance, surging even further in popularity in June. The 2016 vintage – Figeac’s best since 1989 – was released on 13th June, its 67% increase on the 2015 sterling release price signalling its clear intent to reposition itself.

Calon Ségur and Les Carmes Haut-Brion both comfortably achieved their best ever Quality scores with their 2016 offerings, and sold out quickly, no doubt prompting their surges in online search frequency during June. The next step is to get a famous sportsperson to post a photo of themselves drinking it.

A couple of months ago we looked at which Bordeaux 2016s received the best Quality scores, calculated from scores given by our three renowned partner critics: Jancis Robinson, Antonio Galloni, and Bettane+Desseauve. Such quality comes with a price, however, and if the £430 per bottle for Lafleur (Quality score 990) is a little beyond your price range, then we hope this blog is useful. Below are the nine wines from the vintage which qualify as Wine Lister Value Picks.

None of the Value Picks was among the top 15 in our previous blog. Nevertheless, they all enjoy strong or very strong Quality scores on the Wine Lister scale. Fombrauge scores 898, and was described as “rather opulent” and “very successful” by Jancis Robinson. Available at just £16 per bottle, it represents excellent value for money.

Even the wine with the highest Quality score, sweet white Doisy-Daëne (899), is only £25. Those wishing to spend slightly less on a sweet white might also consider Filhot, which achieves a Quality score of 709, and is available at just £14 per bottle. 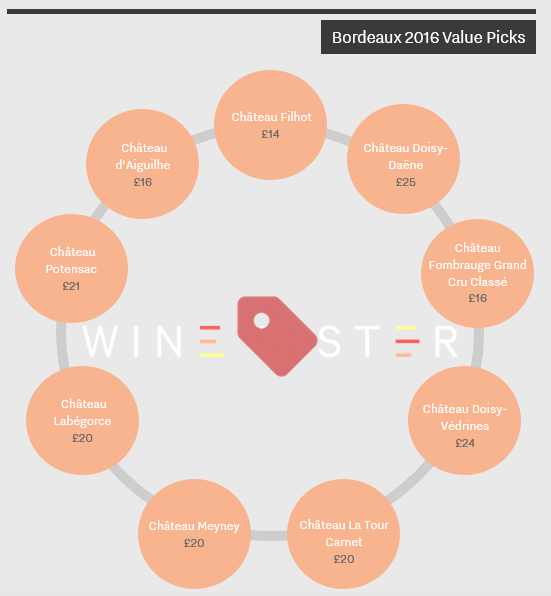 With the latest online search frequency data in from Wine-Searcher we can now see which wines caught the public’s attention in May. Results demonstrate the effect of the 2016 en primeur campaign – now coming to a close – with Bordeaux brands taking four of the five top spots.

Cos d’Estournel saw online searches rise the most last month: the brand was one of the first out of the blocks with its 2016 release, which came in late April, maintaining the same price as its 2015. Exactly one month later, Lynch-Bages released its 2016 for €96 ex-négociant. Despite a 14% increase on 2015, the release went down well on the Place de Bordeaux, perhaps due to the wine achieving the highest Quality score of the century.

Montrose, which saw the third largest increase in searches in May, released its 2016 mid-month. With its Quality score up on 2009, 2010 and 2015, but, like neighbour Cos, releasing at the same price as 2015, Montrose 2016 looked like one of the vintage’s better buys. Figeac also saw searches soar in May but is something of an anomaly in this table – it only released its 2016 on Tuesday 13th June, too late to influence May’s search statistics. Nonetheless, the brand may well be garnering interest due to its exceptional Quality score, as rated by our three partner critics (Jancis Robinson in the UK, Bettane + Desseauve in France and Antonio Galloni in the US).

The final wine of the table, providing some respite from Bordeaux, is a heavyweight from Burgundy: DRC La Tâche. Two auctions in May – one from Sotheby’s and one from iDealwine – saw a number of bottles of La Tâche for sale, which may explain the boost in searches.

You can download the factsheet (from which you can access the wine page and the interactive chart) here: Wine Lister Factsheet Pontet-Canet 2016 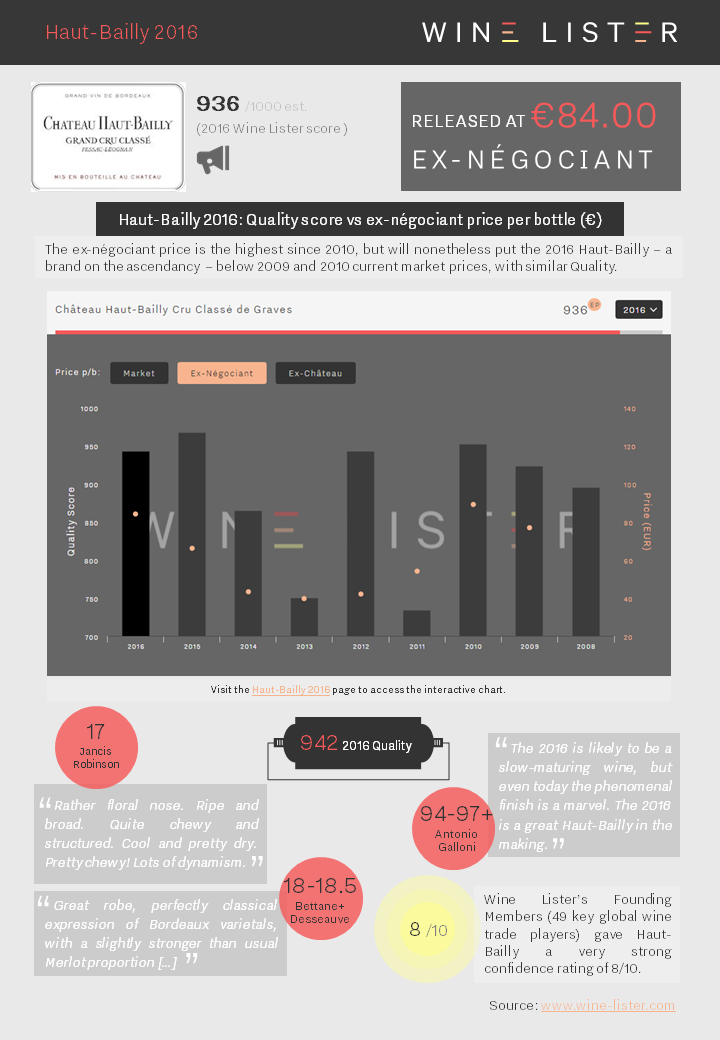 You can download the factsheet (from which you can access the wine page and the interactive chart) here: Wine Lister Factsheet Haut-Bailly 2016

Bordeaux en primeur analysis of Château Pichon-Longueville Baron 2016, which has been released this morning at €114 ex-négociant, an increase of 19% on 2015, with volumes down 20% on last year:

You can download the factsheet here: Wine Lister Factsheet Ducru-Beaucaillou 2016

Bordeaux en primeur analysis of Léoville Poyferré 2016, which has been released this morning at €66 ex-négociant, a 20% increase on 2015.

Château Margaux was the final first growth to release its 2016 wines en primeur yesterday (although we still await a second tranche from Château Lafite – see our blog post on the first tranche). The price of €420 per bottle ex-négociant matched that of Mouton and Haut-Brion, and represents an increase of 9% on 2015.

The reception was very positive all round, with pricing and volumes were both considered to be expertly judged, with one member of the Place de Bordeaux referring to the release as “very professional”, and another saying it was difficult to imagine any problems selling the stock, and “we’d be more than happy to hold a bit more back if necessary!”

A particularly astute move by the commercial team at Margaux was the decision to set a UK RRP this year, which effectively served to negate the weak pound, by curbing any possibility for UK merchants to allow themselves a larger margin, as they had done last year (when they quite rightly judged the immense demand for the very well rated 2015 – Wine Lister Quality score of 988). This means the 2016 represents a relatively modest year-on-year increase of 9% in pounds as well as in euros, rendering the RRP of £432 per bottle more palatable to UK customers.

Margaux also kept the trade happy releasing at least the same amount of the grand vin as last year, if not a little more in some cases, with UK merchants still clamouring for more. The second wine, Pavillon Rouge, was up 20% in volume terms. Bien joué.