Today’s blog explores another finding from Wine Lister’s 2017 Bordeaux Market Study, released last month. The chart is taken from one of the final sections of the 48-page report, where we surveyed our 49 Founding Members, key players of the global fine wine trade – including merchants, auctioneers, and several high-end retailers – for their views on Bordeaux.

We asked respondents to list 10 fine wine brands from Bordeaux that in their experience sell consistently, year in, year out.  Four of the first growths are featured among the responses, with Lafite and Mouton leading the way. Meanwhile, Latour is conspicuous by its absence, with less volume in the market since its withdrawal from en primeur in 2012.

This is just a taster of the Bordeaux Market Study. You can download the full 48-page report from the Wine Lister Analysis page (subscribers only).

In last year’s inaugural Bordeaux study, Wine Lister recapped the region’s recent turbulence and concluded that Bordeaux was moving into a more positive phase. This year’s study – published this week, and available for subscribers here in English and French – continues that analysis, examining the region’s global positioning in the market before drilling down into its appellations and more than 100 of its top wines.

We’ll be revealing a few of the report’s findings over the coming weeks, beginning here with the trade’s view. Earlier in the year we surveyed our Founding Members (49 key fine wine trade players from across the globe), for insight into their confidence in Bordeaux’s individual wines. None got a perfect 10/10, but eight received 9/10, compared to only three last year (Latour, Margaux and Petrus), highlighting the trade’s surging confidence over the last 12 months:

While the majority of wines moved up one place from an 8/10 rating last year, Canon has greatly improved its position within the trade, leaping ahead three points from 6/10. Its 2015 vintage was declared by many to be the estate’s best: our US partner critic Antonio Galloni called it “one of the undisputed stars of the vintage” and awarded it an in-barrel score of 96-98/100. Canon 2016 has also been lauded by the critics, scoring 18.5/20 from our UK partner critic Jancis Robinson. 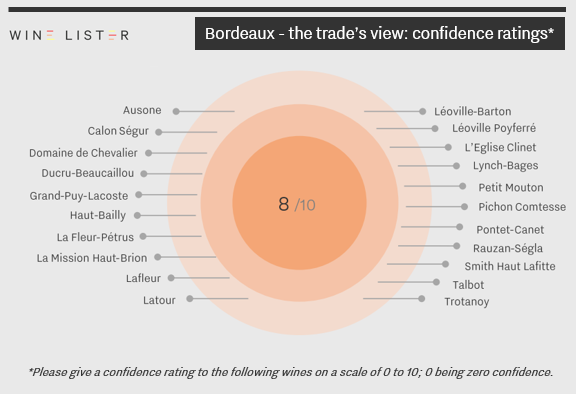 Meanwhile, 21% of the 108 wines surveyed received a confidence rating of 8/10, up from 18% of wines last year. Those whose standing has leapt significantly include Domaine de Chevalier, Haut-Bailly, Petit Mouton, Smith Haut Lafitte and Talbot, all up from 6/10 last year.

Trading volumes are a key measure of a wine’s success in the marketplace. To evaluate these, Wine Lister uses figures collated by Wine Market Journal from sales at the world’s major auction houses, looking at the total number of bottles sold of the top five vintages traded for each wine over the past four quarters.

With the first quarter data now in, we look at which wines saw the greatest incremental increase in bottles traded. Although the list is dominated by French wines, top of the table is a Tuscan, Biondi Santi Brunello di Montalcino Riserva. The producer was recently highlighted as one to watch in a survey of Wine Lister’s Founding Members. The rise in auction sales for this wine has had a significant impact on its Economics score, boosting it from 911 to 945/1000. Volume is just one of the five criteria that feed into a wine’s Economics score, along with four different price-related metrics.

The wine seeing the second largest gain in trading volumes, Domaine du Pegau Châteauneuf-du-Pape Cuvée Réservée, also has the lowest Economics score of the table, at 789. Nonetheless, its overall Wine Lister score is very strong at 846 (lifted by a high score for Brand), and with the latest data in from Wine Market Journal its Economics score is on the rise.

The final three wines of the table – two Bordeaux first growths and a prestigious Champagne (Taittinger Comtes de Champagne)  – also benefitted from increased trades in the last quarter. All three enjoy very high Economics scores, with Lafite Rothschild the highest, at 955/1000. Meanwhile it seems that 2017 has been a positive year so far for Latour, which was also among the top five wines that saw its number of searches increase significantly in March.

In the latest of our blogs on the findings from Wine Lister’s Tuscany Market Study – following on from a look at the region’s global standing, and the popularity of its appellations – we turn our attention to its individual wines. Here, we have carried out an in-depth survey with our Founding Members (the key fine wine trade players from across the globe, between them representing more than one third of global fine wine revenues), for insight into their confidence in Tuscany’s individual wines.

First, we asked respondents which producers are due to see the largest gain in brand recognition in the next two years. More than half those cited are producers whose flagship wines are Super Tuscans / Tuscany IGT: Tenuta Tignanello (Tignanello and Solaia), Masseto, Montevertine (Le Pergole Torte) and Tua Rita (Redigaffi).

We also asked the trade which individual Tuscan wines they consider to be hidden gems: wines that they rate highly but which they perceive as underappreciated elsewhere. Two of these wines are made by rising star producers above: Tignanello, and Le Macchiole’s Paleo Rosso, suggesting that these wines may not stay underappreciated for long.

Apart from Soldera Case Basse, all of the wines cited have average prices per bottle of £75 and under, combined with strong average Quality scores that vary between 814 (Castello del Terriccio Tassinaia) and 919 (Tignanello).

To take a look at the rest of the survey’s findings – including which Tuscan wines have seen the sharpest rise in demand, which consistently sell out, and which the trade have most confidence in – please log in to Wine Lister and download the report from the Analysis page.

Today saw by far the largest release of Latour direct from the cellars since the property withdrew from the en primeur system starting with the 2012 vintage. Château Latour has released c.3,000 cases of its 2007, the first real test of its new distribution strategy, and reports from the Place are positive. Courtiers and négociants say the price has worked (for the first time the ex-château stock is released at market level, with no “provenance premium”), and report that the entire parcel has been sold, with demand “very strong”.

Using Wine Lister’s unique combination of data, we’ve created a visual guide to this exceptional château and its 2007 vinatge: 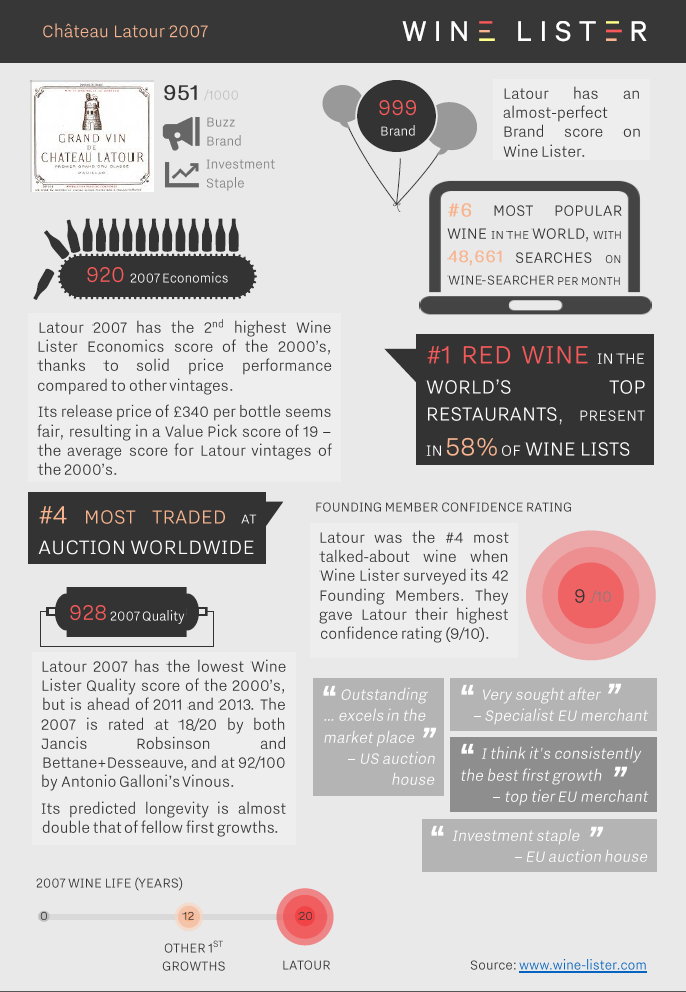 Which producers will see the largest gain in brand recognition in the next two years? That is one of the many questions we asked in a unique survey of our 42 Founding Members – the majority of the world’s largest merchants, top international wine auctioneers, and several high-end retailers, together representing well over one third of global fine wine revenues.

The chart above shows the top 10 brands expected by Founding Members to see their brand recognition increase in the next two years. Unsurprisingly, Burgundy takes the lead, making up six of the ten places. The trade’s picks included rising stars such as Arnaud Ente and Jean-Marc Roulot. Wine Lister’s Founding Members also believe that superstars such as Armand Rousseau will grow even further in brand recognition.

Penfolds also already possesses a brand so strong it is hard to comprehend how it will grow much further, as the trade predict it will. The appearance of three Bordeaux wines also comes as a surpise, given the preeminent position already occupied by brand Bordeaux in the fine wine market. Our Founding Members see room for burgeoning brand power for Châteaux Figeac, Haut-Brion, and Lynch-Bages. Why?

Figeac is causing a stir and is widely held to be on the path to regaining greatness. Haut-Brion is perhaps viewed as having less renown relative to its fellow first growths in the Médoc, in spite of Samuel Pepys fame (“a good and most particular taste”). However, Lynch-Bages is already so many leagues ahead of its peers in terms of brand recognition (check out its impressive distribution in top restaurants and online search frequency on the site), that it’s hard to see where it can go next. Have our Founding Members got it right?

To access more findings from our Founding Member survey, read the complete study, “Bordeaux – Reasons to Hope“. If you are not a subscriber yet, why not try a 14-day free trial!