In an attempt to squeeze every last drop out of summer, this week’s Listed section features Wine Lister’s top 5 rosés by Quality score. Whilst the Côte d’Azur might seem a long way away, these five Provençal wines serve as a reminder of warmer climes and long sunny days.

Wine Lister’s Quality score measures a wine’s performance across two criteria – critics’ scores and ageing potential. Whilst these wines perform relatively well with the critics, they are not built with longevity in mind, and have an average predicted drinking window of just three years – compared to 17 and 16 years respectively for the top five whites and reds for Quality. 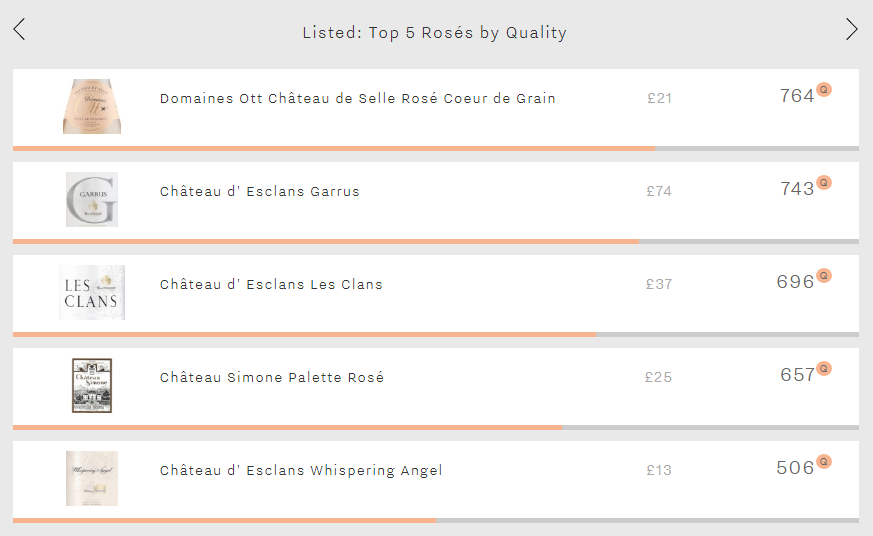 Domaines Ott Château de Selle Rosé Coeur de Grain tops the table with a very strong Quality score of 764. Currently priced at around £21 per bottle (depending on the retailer), it is the second-cheapest of the five, and represents excellent value for money.

Garrus, the first of three wines from Château d’Esclans, comes next with a Quality score of 743. At £74 it is by far the most expensive of the group – over twice as expensive as is its close relative Les Clans, with a Quality score of 696. Both these wines divide the critics, performing well with Antonio Galloni and Jancis Robinson, but less favoured by Bettane+Desseauve.

In fact, the French duo are considerably less enamoured with these five rosés than Jancis Robinson in general. Perhaps still rosé has a way to go before it is considered a serious vinous offering in France.

Château Simone Palette Rosé fills the fourth spot with a score of 657, followed by a third wine from Château d’ Esclans – Whispering Angel. Whilst it has a modest Quality score of 506, and is by far the least expensive of the group, it has by far the best Brand score (805). Proof that formidable branding can propel a wine beyond where its intrinsic quality level might suggest (though we certainly wouldn’t turn our noses up at a chilled glass of Whispering Angel on a sunny day like today).